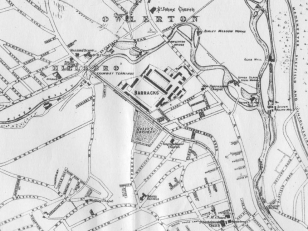 Hillsborough, mid-1880s. Kipling Road appeared circa 1900, on the NW quarter of the ‘Tramway Terminus’ site.

A map of the old city: off-white, off-centre, its grey pleats blurred in the upload. At the north-western corner, the road out darkens with the tramway, passing a congregational church, a cricket ground, and a black-edged barracks, before the tram is caught by its own terminus and the road splits at the river. This is Hillsborough, sketched in the 1880s, not yet incorporated within the City of Sheffield. Two decades on from the Great Flood, we see a handful of lanes, a suburb’s bare bones. We don’t see the recovering industry, the vanishing chapels, the new streets in their neat script, pencilled in at the century’s turn: Rudyard Road, Rider Road, Haggard Road, Kipling Road.

‘Kipling Road’ is the first poem in Rob Hindle’s sonnet sequence ‘Hillsborough to Middlewood, February 1931′. Published in 2013, it retraces a journey made by Hindle’s great-grandparents’ son, Harold, eighty years before: a journey of little more than a mile, a journey that will take him out of the city and into the West Riding. We are to infer that this itinerary is his last. The sequence is narrated in the first person, the poet steering himself, and us, through a world that is half-familiar and half-imagined, in the present tense, at street level, at walking pace. The two journeys – the poet’s, and the great-uncle’s – maintain a slight distance from each other, from the territory they move through, and from us. There is much that we do not know. We do not know if Harold’s departure was accomplished on foot, or by other means; whether or not it was made voluntarily. The sequence offers glimpses of thresholds – historical, physical, emotional – that may or may not yield to our touch. Yet it is this quality of indirectness that gives the work its intimacy; we sense more than we see, slowing, pausing, ‘feeling the air for a way in’.

No through road, no exit. Kipling Road is one of several blind alleys built on ground formerly occupied by the old tramway terminus, a corner of which will be reclaimed for the Hillsborough Interchange a century later. Two terraces, each of seven houses, odd numbers lined up against even numbers. At the dead end of the street, where the cars wait and turn, we find a grass slope banked against a stone wall; behind the stone wall, a higher breezeblock wall; behind the breezeblock wall, a tall wooden fence, above which we can make out the pitched roofs of bus shelters. Little else escapes the fence: a faint burr of engine noise, the hum of buses caught between arrival and departure. A single turret, sinking from sight as we near the wall. We can’t see the rest of the barracks, but they’re there, south and west, changed into retail, business, split-level parking, the cavalry gone, the infantry gone. The street, as we find it, is innocent of these comings and goings, it doesn’t know what happened to the parade ground. It won’t tell you what happened here last week. This isn’t public property, the windows and doors silent, shut, slanting the enquiry. It is sound, leaking from one side or another, that sets things moving, that primes this vision of flight:

Now there is the click of a back door,
the chitter of a budgerigar.
Then you are hurrying from one of these houses,
hair brushed, tangled feet booted […]

There is one way out of the terraces, a left turn, Kipling Road to Rudyard Road, a right turn, then the last few yards of Langsett Road, the Loxley beneath it, unscrambling from the weir, dark and diminished. The poems pick up the ‘bright thread’ of the tram lines, silvering the road from Hillsborough to Middlewood, its subtle incline, snagging when we pause to look around us, fading when we stop to look back. Shoppers and passers-by seem to take on the shade of the great-uncle, his ‘fumbling’, his ‘lurching’, closing in, disturbing the air. The direction is certain, the movement hesitant. East of the tram lines, the ‘thin green’ of Hillsborough Park, its dogs and dog walkers, distant and slow. North-west of the park, the tree-lined suburbs of Middlewood and Wadsley, hiding their separateness, their spread, their wealth. The tram lines run out and the city falls behind them. And here is memory, sharpening on these new edges, glancing off familiar details: the post box, the school,

the park where I rushed along one day, my mind,
gleeful and vicious, running after me. Middlewood,
childhood cant, that thing in all our cellars,

I shouldn’t have dared. I pay out my breaths
like twine, each step shortening.

Middlewood Hospital (formerly known as the South Yorkshire Asylum, the West Riding Asylum (Wadsley) and Wadsley Mental Hospital) opened in 1872 to accommodate the overspill from the West Riding County Asylum at Wakefield. Over the decades, it gradually expanded from 750 beds to over 2,000, with many of these requisitioned for emergency use by the War Office during World Wars I and II; this number was sharply reduced during the 1980s, as psychiatric patients began to be released into the care of their local authorities, and the hospital finally closed in 1996. Shortly afterwards, the site was acquired for residential development, the expansive grounds, superb views and good transport links making it the natural setting for an exclusive village, retaining many of the original structures; the old clock tower, restored and converted, now watches over the new apartments to the rear. It was here, a mile or so from Kipling Road, that Harold Hindle was brought in 1931, and it was here that he died in the following year. He was 27 years old.

The final poem in the sequence is an encounter with the redeveloped site, or, rather, those parts of the village accessible or visible to the non-resident: Kingswood Hall and Middlewood Lodge are locked away behind secure, gated entrances. In London Orbital (2002), his psychogeographical survey of the M25, Iain Sinclair addresses the rehabilitation of the former psychiatric hospitals and asylums at the edges of the capital; as the late 1980s property boom began to eat up more space, these dormant, unloved sites were reappraised for their proximity to the new motorway, offering rural character, seclusion and discretion. Buildings that were designed to keep people in – monitored by staff, unseen by the ‘outside’ world – were redesigned to keep people out. Purged of their ghosts, cleansed of their dirt, the estates assume new names, a selective heritage. We are not invited to poke around. Hindle leaves us at the gates of Wadsley Park Village, where

the locked front door gleams and the tiny cameras

look at everything. As I leave something clicks, twice:
tut tut. Through your eyes I see myself out.

‘Hillsborough to Middlewood, February 1931’ is one of five long poems and sequences by Rob Hindle (under the collective title Flights and Traverses) in the walking-themed anthology The Footing (Longbarrow Press, 2013); click here for more information about the book. Hindle reflects on the research and development of the poems and sequences in this essay. Click here to visit his website.